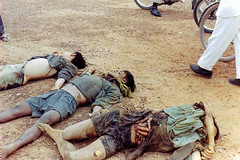 “Arthur, I am wondering if you have any ideas or thoughts on terrorism? Other than the idea that we should love folks who murder innocent women and children and love the folks who go over seas and kill the enemy.
Your arguments seem from the same old school liberalism that opposed the effort of America in World War II. You are removed from mainstream thought and you seem not to have any particular concept other than objecting to the religious people getting involved in the military.
Is that about it?”

Gosh, that must be about it.

I doubt that either one of us would hesitate to drop our cell phones, leave our keyboards and find some sort of weapon to defend our homes, our streets, our towns and our country the moment real actual enemies put boots on our homeland. What we say to one another about whether or not we would justifiably kill to defend our families and country isn’t the issue about indiscriminate offensive violence as a means for solving the problem of terrorism.

I in fact totally agree with what is written in the Tao Te Ching:

Weapons are the tools of violence; all decent men detest them.

Weapons are the tools of fear; a decent man will avoid them except in the direst necessity and, if compelled, will use them only with the utmost restraint.

Peace is his highest value. If the peace has been shattered, how can he be content? His enemies are not demons, but human beings like himself. He doesn’t wish them personal harm.

He enters a battle gravely, with sorrow and with great compassion, as if he were attending a funeral.

My thoughts on terrorism concern primarily a desire for justice to the victims, redress if possible, accountability and harsh punishment for those guilty.

Those thoughts do not obsess on a blind vengeance against specific individuals, countries and peoples to whom guilt has not been justifiably and irrevocably assigned. Those thoughts then do not have a need to construct some sort of theological portrayal of God that justifies the resulting horror.

My thoughts do not need to claim that God wants or approves of the sort of killing commenced by professed Christians in government who garnered support for commencing killing specific people with no regard for collateral damage.

My thoughts do move to dismay at any Christian who publicly attempts to justify killing innocents because political demagogues labeled militaryincursion as a key component of something else labeled a “war on terror”; the implication being that war is a dirty business in which innocent human beings will suffer and collateral damage is acceptable so long as that damage doesn’t come ashore here.

The same people who oppose abortion have not spoken out about the deaths of pregnant women who fall victims as collateral damage. The war-caused death of a pregnant woman is in fact the military abortion of her unborn.

Put religion and patriotism in the same mixer, turn on the switch and one invokes a responsibility to reconcile the tenets of the religion with the realities of patriotic involvement in war.

Too many Christians in this country are looking the other way;  in fact have their heads buried in the sand whenever protest is made about so much killing.

When is the God of the morally indignant but violent-minded American Religious Society  going to be satisfied?

One thought on “A God That Justifies the Horror”