Follow Mormon Born: All Deeds and Reflections on WordPress.com
Education for Ministry 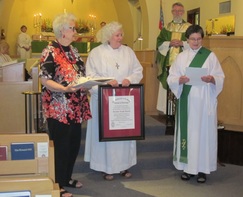 Education for Ministry is a four-year program offered through the University of the South’s School of Theology for those who would like to better understand the history of the Judeo-Christian faith, the surroundings that helped shaped it and how the church and society have influenced each other over time.

As a student of EfM, you’ll learn methods of more fully incorporating your faith into your everyday life. The program imparts knowledge and confidence to your personal ministry, perhaps helping you to discover your call to service in the church and in the community.

This is not a traditional “Bible Study” nor is it a lecture series. EfM is a safe place to discuss individual beliefs and to expand understanding of the Christian faith. There are no prerequisites. Reduced-rate tuition and partial scholarships are available. While it takes four years to complete, your commitment to EfM is given one year at a time.

My beautiful wife and I have entered into the mystery so to speak. The activity includes what for us has always been an effort to consciously enter into the mythology as well. Our first year will be an examination of the Old Testament and by the time we had completed the preface and introductory chapter, it became obvious to me that EfM was not to be a course teaching Episcopal beliefs nor  orthodoxy.
EfM seems to be what it purports:
Some expect EfM to be a course in religion or theology, like
one that might be taught at their local college or university.
Some expect it to be geared toward preparation for becoming an ordained minister or pastor, for such is the limited understanding of ministers in contemporary culture.
EfM actually is neither of these, although it does provide an education in the content of the Christian tradition through reading the Bible alongside some basic biblical commentary, church history, and practical introductions to Christian theology and ethics, as well as through encouraging an appreciation for ways in which Christians respond to encounters with those of other faiths.
EfM also explores a wider concept of ministry, based as it is in an understanding that baptism, the fundamental rite of entry into Christianity, marks our call to minister to one another in Christ’s name in the course of our daily lives.
At its heart EfM is a program in practical theology, that is, a program
based in a set of five core practices that form and support us in the various
ministries to which we are called.
The early reading was essentially academic and involved a neutral survey of what is known about the earliest times in Mesopotamia, the various cultural mythologies and how they served to inform what became the Jewish story of identity and origin. Treated as mythology first and foremost, we found ourselves immediately freed from having to consciously force a belief in a supernatural cause and effect for the emergence of Old Testament theology beginning with a godhead that was neither supernatural nor divine in the usual sense of such concepts.